IHO Assembly sets the priorities for the next 3 years

The IHO Assembly has finished after 3 days of productive meetings. From 16 to 18 November IHO Member States were able to discuss how to move forward on work items, with the Assembly being held by videoconference.

The sessions were officially opened by HSH Prince Albert II of Monaco who highlighted the importance of international cooperation in hydrography to monitor a changing ocean.

During the Assembly, Member States approved the new IHO Strategic Plan which lays out the organization’s priorities for the coming years. The inclusion of Goal No. 2,  targeting the increased use of hydrographic data beyond the traditional charts and Goal No. 3 related to participation in international initiatives on the sustainable use of the oceans confirm the IHO is now also clearly committed to reconciling the use and the preservation of the marine environment. Traditionally hydrographic data was used mostly for the safety of navigation, but it can actually be used by a wide variety of stakeholders and is an example of how relevant hydrography is in discussions on the protection of the oceans: to monitor changes and effectively protect, we first need to know the marine environment and have reliable baseline data. A new brochure, available on the IHO website, summarizes the ambitions of the IHO Strategic Plan for 2021-2026.

Assembly participants approved the roadmap for the implementation of the IHO Universal Hydrographic Data Model (S-100) which can be used by all producers and users of ocean data including navigation, marine energy, oceanography, weather, etc. Already several international partners such as the International Association of Marine Aids to Navigation and Lighthouse Authorities (IALA), the Intergovernmental Oceanographic Commission of UNESCO (IOC) and the Joint Technical Commission for Oceanography and Marine Meteorology (WMO/JCOMM) have developed S-100 based Product Specifications. In addition, with the aim of facilitating the provision of the geographical limits of oceans and seas digitally, it was agreed to develop a specific dataset as part of the S-100 product family. The IHO Council Chair, Rear Admiral Shepard Smith of the USA, presented the strategy for the S-100 Implementation Decade and the timeline for actions. The IMO e-navigation Strategy Implementation Plan requires that all Maritime Services be S-100 conformant, as it specifies the method for data modelling and developing product specifications. The establishment of a joint IHO-Singapore Research and Innovation Laboratory, also decided by the Assembly, will be instrumental in the implementation of S-100 services.

Member States also approved the new project proposed by Canada on Empowering Women in Hydrography, which aims to increase gender equity and the number of women in leadership positions. The project will include training and communication on different hydrographic careers.

Representatives also discussed the future layout of the new IHO e-learning centre which is planned to be hosted by the Republic of Korea at the Korea Hydrographic and Oceanographic Agency (KHOA). The organization had been wanting to increase the offering in terms of distance training for some time, and the current pandemic highlighted the need for this.

The Assembly approved the three-year IHO Work Programme and Budget estimates for 2021-2023 that cover the services provided by the IHO Secretariat, including the relations with intergovernmental and other international organizations, the development and promulgation of global hydrographic standards to enhance safety of navigation at sea, protection of the marine environment, maritime security and economic development, as well as cooperation on hydrographic activities among the IHO Member States under the aegis of the Regional Hydrographic Commissions (RHCs).

This Assembly, which was carried out for the first time by videoconference, together with the important work done and achievements through correspondence or remote events since April, are examples of the IHO’s commitment to continue working on its mission even under these extraordinary circumstances.

The full list of decisions taken during the Assembly are available in the Final Summary Records. 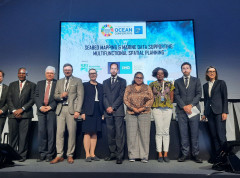