Representatives of 26 countries sitting on the IHO Council and Observers gathered last week in Monaco to review the work carried out and establish priorities for the coming years. This included progress with the transition to digital data services through the implementation of S-100, the Universal Digital Data Model, as well as hydrography’s contribution to global initiatives such as the Digital Twin of the Ocean.

Many of the discussions focused on the development of new S-100 standards and implementation of S-100 services which are central to the shift from simple Electronic Navigational Charts (ENCs) to digital geo-information systems capable of receiving and processing data on a wide range of themes and disciplines such as Marine Protected Areas, Navigational Warnings, Surface Currents, Water Level, detailed seabed topography etc…

The Republic of Korea presented the results of the S-100 Testbed Project jointly organized with the United States of America and which confirm the four main benefits of S-100: increased safety of navigation, improved efficiency, optimized load capacity for ships, and paving the way for autonomous shipping. During the test, participants wore eye-tracker equipment to monitor eye movement when using new S-100 digital products compared to traditional products. In addition to providing insight into how mariners use onboard navigation tools, information which can be used to tailor new products, results also showed that S-100 solutions had a higher usability and were more comfortable to use. The test likewise highlighted the economic benefits of S-100-based products: the use of real time information on depth and currents allowed users to identify alternate, safer routes with shorter distances, resulting in reductions of fuel consumption. It was estimated that the use of such S-100 products could decrease fuel consumption costs by 45% per year.1

Once S-100 is implemented, having machines which can read and process real-time data based on the standard would also facilitate the development of smart ports and enable ships to optimize their load capacity and their routes, meaning less ships on the sea, shorter latency periods outside of ports, and lower CO2 emissions. Ultimately this data would also pave the way for autonomous navigation from port to port. 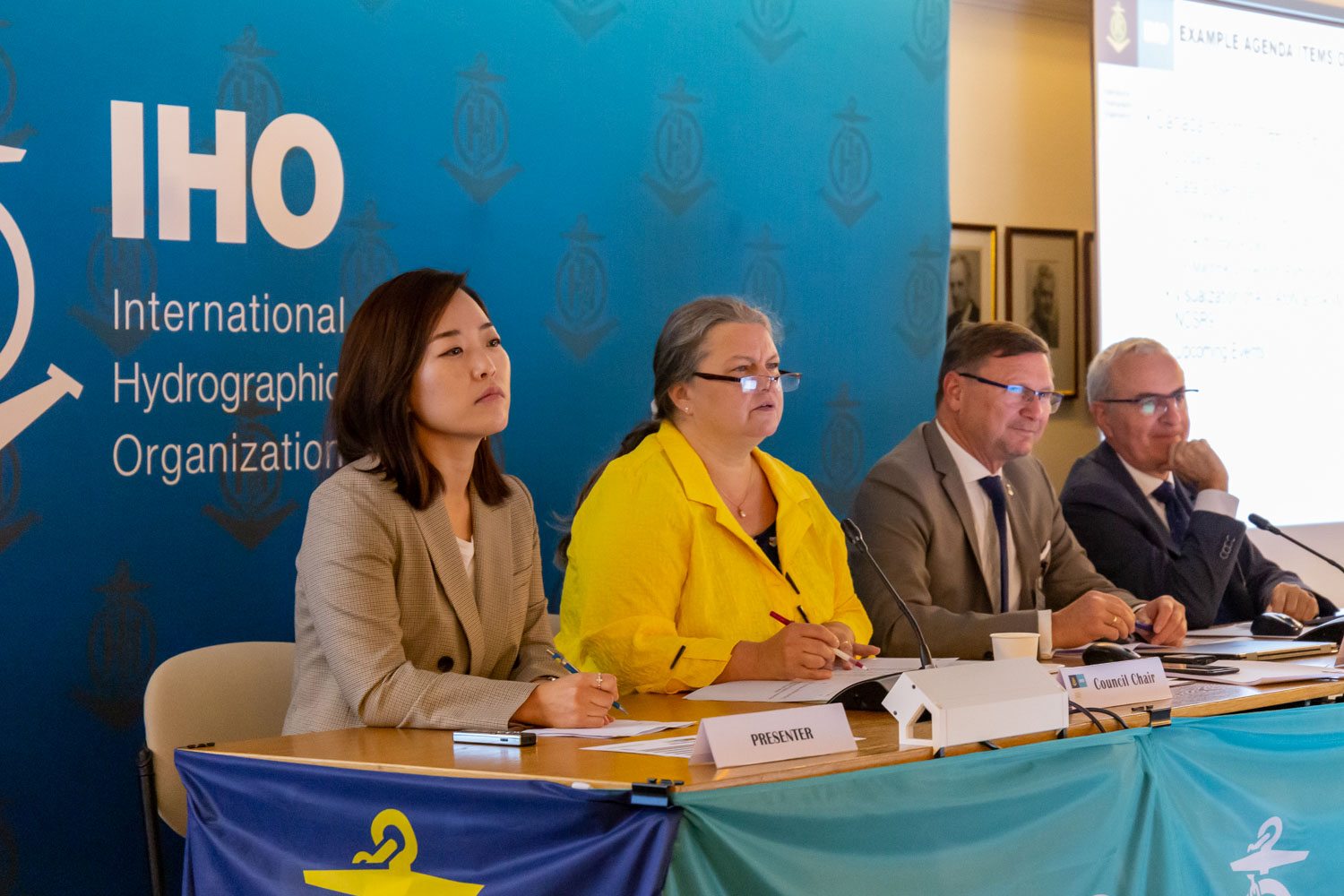 The S-100 concept is becoming a reality and Council Members were informed on progress with its implementation along with associated commitments and target dates. This is following the ninth meeting of the International Maritime Organization (IMO) Sub-Committee on Navigation, Communications, Search and Rescue of the (NCSR9) in 2022 which endorsed the proposal initiated by IHO to include S-100 compatible data sets as a valid format in ECDIS. IHO Member States and stakeholders are encouraged to actively support the development of the S-101 ENC and other S-1xx Product Specifications and potentially accelerate delivery of operational versions of some products. The new Strategy on Capacity Building endorsed by the Council will serve as a building block for the global community in the transition to enhanced digital services.

Council Members also discussed how hydrography can contribute to some of the discussions taking place on the international stage, such as how it can contribute to the creation of the Digital Twin of the Ocean. More than a simple model, the digital twin will constitute a virtual environment that has near real-time data feeds that replicate the parameters of the ocean environment to facilitate the development and testing of new technology but also the modelling of changes in the marine environment, such as those brought on by climate change or human activities. The Digital Twin of the Ocean could serve as a bridge between scientific knowledge and decision-making. 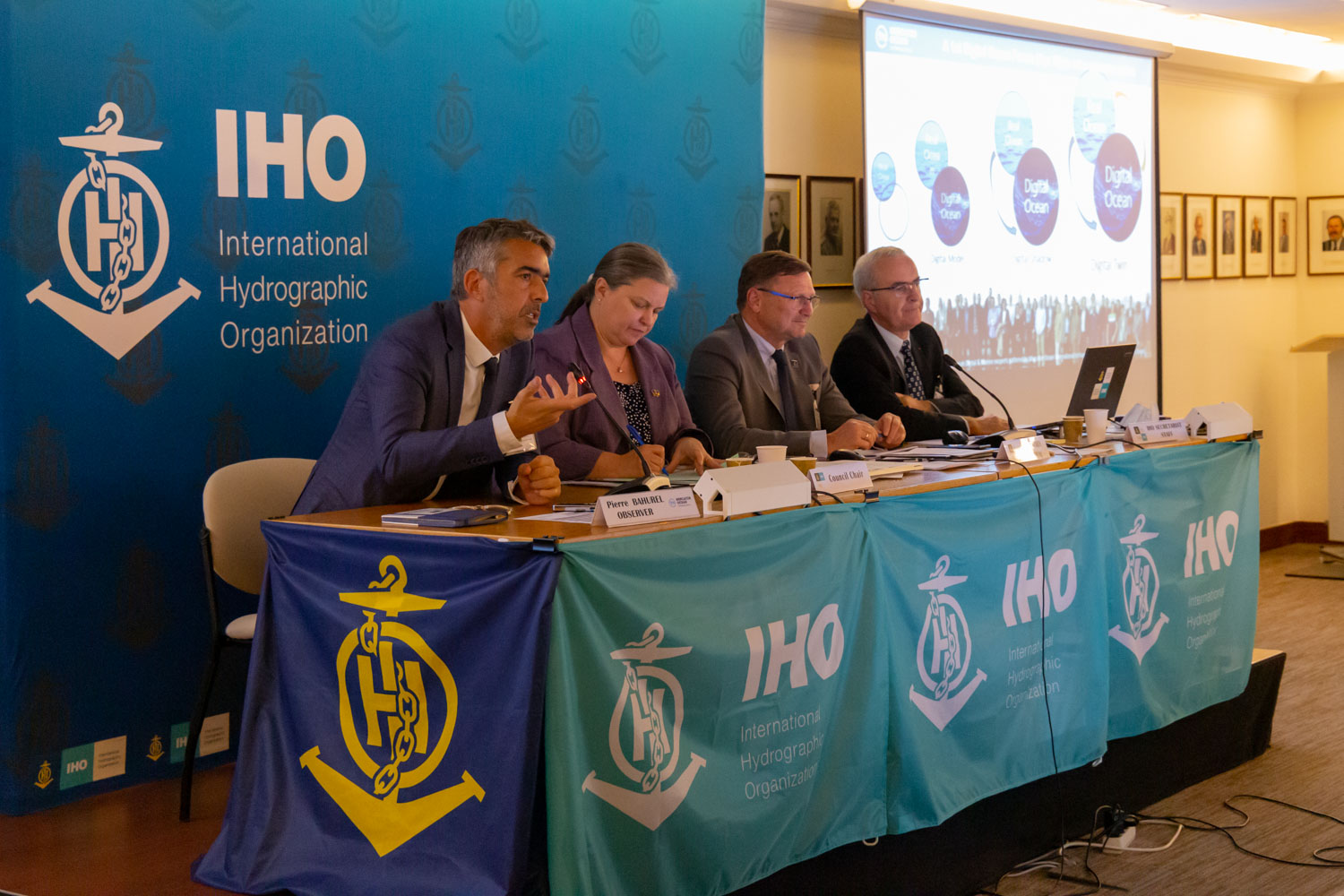 There was a need to improve and diversify the information in the digital twin, with the vision being to set up a platform that various data systems could be plugged into, connecting community and services with robust, interoperable systems worldwide. The ocean prediction community already uses some international standards, but they are not part of a recognized framework. This is why the S-100 Universal Hydrographic Data Model is of interest. For example using the S-111 standard to gather surface current data for the development of dynamic hydrographic products could help eliminate the barrier posed by the use of different formats.

The meeting was chaired by Dr Geneviève Béchard of Canada and brought together over 70 participants. The outcomes of the Council meeting will guide the actions between now and the Assembly in May 2023 which will bring together all IHO Member States, industry, and observers.

The Council session is the culmination of the IHO working year. Coming together at the IHO Secretariat, Council Members reflect on progress made and take decisions for the next steps in technical standardization and capacity building support.

The full list of topics covered and decisions is available here.

[1] Estimate provided by the Korea Hydrographic and Oceanographic Agency (KHOA) which carried out the test.